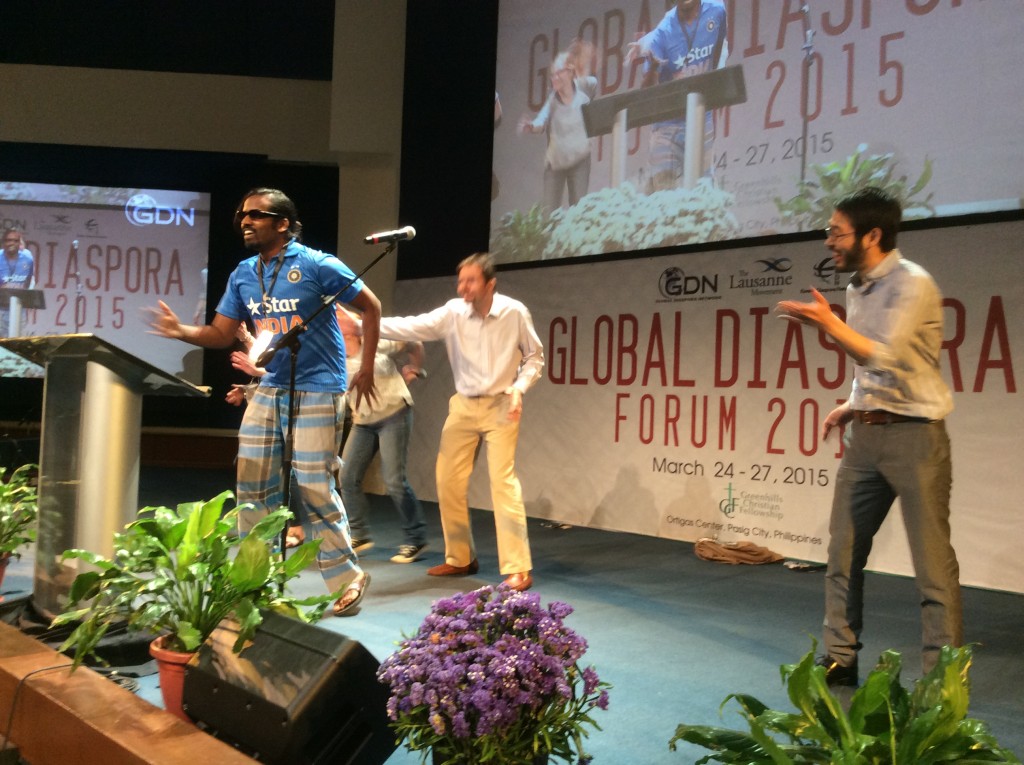 Our rather refined assembly of religious leaders, academics, government officials, and NGO and business leaders experienced a bit of a shock to the system during the evening sessions of the Global Diaspora Forum in Manila.  We will devote a number of posts in the future to recalling those evening session highlights, but one of the funnest was definitely the Simple Superstar, Wilbur Sargunaraj who joined us in Manila as a special guest to help us think about the theme of “Entering the Other’s World”.  His on stage and on camera antics were just what some of us needed during a week of intense academic reflection and discussion.

Among other things, it was our privilege to host the world premiere of Wilbur’s new music video, “Boda-Boda” which features a great song from his new album Feeling Genki (available on iTunes and other platforms)

The entire Feeling Genki album is not only sure to get you moving out of your seat but if you pay attention to the lyrics and musical styles you stand to learn a lot about various cultures of the people on the move.  Actually, Wilbur himself is a great example of a person “on the move” who not only travels around the world but seeks to learn from and embrace the peoples and cultures that he encounters along the way.  To be sure, the Feeling Genki style is a fusion of world and modern pop music, which not everyone can appreciate, but if you give it a chance, there is quite a lot for everyone here.  In addition to the fun, Ugandan-flavored “Boda Boda”, we especially loved “First Class Nuts” which is not only a funny commentary on last year’s much reported airline “nut rage” incident, but also provides some nice advice on traveling with simplicity and character.  “Girl Arise” is another song that we loved as it raises issues of discrimination and violence against women which is something that diaspora thinkers must consider carefully as the realities of forced displacement and trafficking disproportionately affect women.

We are so thankful that Wilbur was able to join us for the Forum and we’ll be sharing more about his time with us in future posts.  For now, enjoy the Boda Boda music video that has now been released on Youtube.  And … it’s really okay if you dance a little bit.

An alumni of Wheaton College Graduate School (USA), Cody has authored and edited various articles and books in the field of missiology. He is a grateful husband, father, brother, son, pastor, mzungu, and bhakta.