(Expanded version of the Closing Remarks by Dr. Sam George)

What a three full days this consultation had been. Someone remarked that this felt like drinking from a fire hose! And I responded saying this is like a graduate class in World Christianity with expert faculties drawn from all over the world talking about missions from their distinctive diaspora contexts. No doubt, this was an intense learning experience and overwhelming at times. But we also tried to carve out time to worship, pray, connect, discuss, converse and local site visits.

These three days were designed to facilitate connection and learning on diaspora missions as well as to generate fresh content on how migration over the last one hundred years from the Global South to Europe has transformed and is advancing Christianity in new ways in Europe. Someone told me that she realized that ‘I am not the only one talking about diaspora missions’ and was excited to connect with so other diaspora voices and insights. Others shared that diaspora as a fitting new lens to understand their own state of perpetual wanderings and felt challenged to reconceive the missionary task through this new perspective. We intentionally created many cultural immersion experiences through food, language, and culture by taking you to the world of Indian, Chinese and African churches in Liverpool. We were also constantly bombarded by different accents of our speakers, for many of whom English remains a strange and difficult language. Hopefully, you also developed new levels of empathy and skills to decipher what the Global South leaders were trying to communicate with us all. These three days also felt like we have been flying around the globe. We began our journey by going from Liverpool to Munich, Germany for a history lesson of mission of migrants; then we flew to London and Jerusalem looking at Jewish Diaspora; then we explored family and cultural dimensions of religious conversion of Indian Gujarati Hindus in the UK, and subsequently listened to the challenges of ministry among the growing international student population across Europe. Finally, we were informed about the Chinese churches in Europe and many different ways of mobilizing them for cross-cultural missionary work across Europe and beyond, before heading down to the oldest Chinatown in Europe, here in Liverpool.

On the second day, our journey began with a missionary from Manila leading us in devotion, and then we traveled through refugee camps in Germany and other cities in Europe. Later we tried to understand what Korean churches and missionaries are doing in different countries of Europe. Subsequently, we were challenged by a passionate ‘Macedonian Call’ of the Iranian diaspora and heard about the use of television and Internet to train Christians in Europe to evangelize and disciple recently arrived Arabic speakers on the continent by an Egyptian. Then after lunch, a Brazilian mission leader, who has lived in North Africa and Southern Europe for nearly three decades, shared about hospitality culture of the Latino Christians in Europe.

On the last day, we began our devotion by a Nigerian American and then our first paper was presented a Korean involved in training in diaspora leaders in Amsterdam, then we listened to a paper on African Pentecostalism in London, and finally we flew to Lima where our PeruvianBritish missiologist talked about the mission of the Latinos in Europe with a missiological concept of reciprocity. Today was a snapshot of what we have been talking about throughout this consultation – Asia, Africa and Latin Americans involved in missionary work in Europe or in other words, Global South Christians and Diaspora Missions in Europe.

We also had six very distinguished evening plenary speakers drawn from diverse diasporic journeys and expertise. The first night included a British university Vice-Chancellor who hails from South Africa, of Indian descent and a citizen of New Zealand, and a recently retired Anglican bishop of Pakistani origin, and now leading a research and advocacy center in Oxford. The second-night speakers included a Sindhi businessman who was born in Kenya and became a refugee in the UK, later went on to run a successful business and ran for the office of Mayor of London, and now involved in wide-ranging social entrepreneurial activities. The second speaker was of Caribbean origin and based in London, who had served on the leadership of evangelicals community advocating against poverty. The speakers of the final night included a Nigerian engineer turned pastor of a large multiethnic church in Liverpool who shared from about leadership experience and pastoral struggle in ministering in diasporic contexts, and prominent Christian historian explaining migration out of and to Europe over last few centuries reshaping Christianity in the West as well as around the globe.

When I first heard that one of the presenters failed to secure a visa (also several delegates), I felt sad and perplexed about making schedule changes. Then someone reminded me about the diaspora realities of borders, new laws, and policies governing the movement of people all over the world. However, the tour if the Andrew Walls Collection at the Library during the free time proved to be inspirational to many. During the middle of the consultation, we also visited the Liverpool Cathedral, which is considered as the largest Anglican Church in the world. 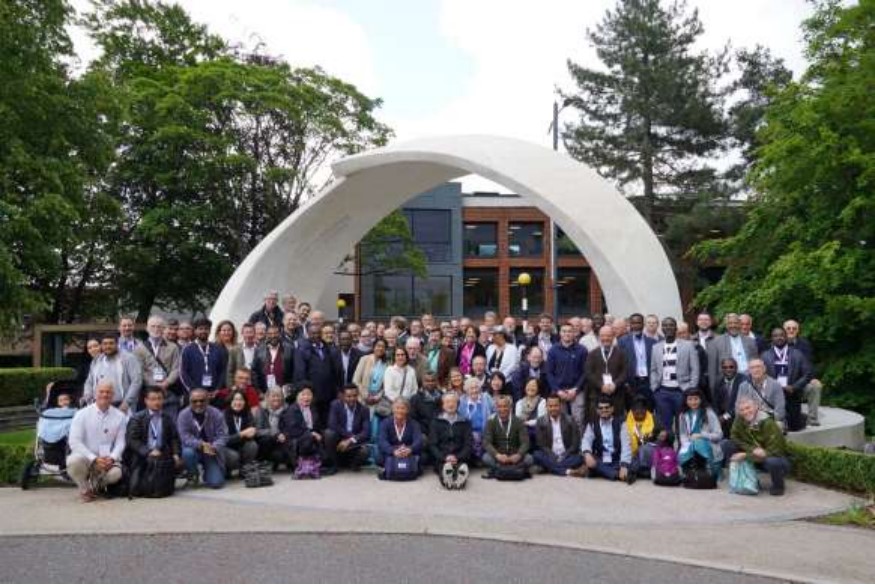 Friends, we gathered here in Liverpool from many nations for three days to talk about diaspora missions in Europe. From here we will scatter again to many places, to engage in many different forms of ministries. The overarching themes of gathering and scattering are at the heart of God’s work in the world. We hope our gathering was an enriching experience to you and may our scattering extend God’s reign on people everywhere.

Before we dispersed from Liverpool, we celebrated Communion together. As we prepared our hearts to partake in the Lord’s Table, I was reminded that we had come from many cultures and traditions, serving our Lord in obedience to His Great Commission in different places. I also realized that the broken body and shed bled of Jesus Christ alone could unite us together across our many differences as the global Body of Christ and to be renewed in our commitment to follow Jesus at all cost till the last breath of our lives.

This year, since the Easter in mid-April, I had the privilege of preaching a message of the Risen Christ in six cities in four continents, from the Caribbean to Asia, Australia and Europe. The Sunday after the consultation was the Pentecost Sunday and I preached at an Indian church in North London. I taught from Acts 1 and 2 about the 120 early followers of Christ received the Holy Spirit and how they become powerful witnesses of Jesus Christ. People from some 14 different places had gathered in Jerusalem for the Jewish feast of Pentecost, which led to the birth of the church and who went on to establish faith communities of Jesus followers far beyond Jerusalem.

We, some 125 people from some 30 nations gathered at the Andrew Walls Center in Liverpool Hope University in early June 2019 for a consultation on diaspora missions. As we disperse from here to nations of your current habitation and many other nations God will take us in future, may we live and preach the glorious gospel of our Lord Jesus Christ to the ends of the Earth. I Praise God for this consultation that brought us all together from many places for a time of learning, praying, discussing, fellowshipping and networking. Praying that this serve us well to live and minister for the sake Christ and His Kingdom in Europe and far beyond, both now and till He returs. Amen.